I've caught it. Fortunately, it's not treatable.

Archive for the tag “relentless”

I found an article recently about energy drinks and how they can contain up to 20 teaspoons of sugar PER CAN! This is insane, especially since our new recommended daily amount of sugar has been reduced to 6 teaspoons according to the WHO. This is insane and what’s even more concerning is that people, especially children, are drinking these regularly! I did a post on child obesity and this links directly with that. Studies have linked energy drink consumption with issues such as obesity, caffeine overdoses, risky behaviour and addiction.

Thee energy drinks are also targetted at those who participate in sports as a way to get that ‘much needed energy boost’ to improve performance. I can’t sit here and say I’ve never drank them and I never will again. I had half a red bull a few weeks ago (I had been drinking a little, so my ability to comprehend it’s awful-ness was hindered somewhat) but I most certainly drink far less. I probably average about 1 every 6-8 months. Prior to my half a can of red bull a few weeks ago, I think the last one I had was in the summer of 2014.

Anyway, energy drinks are getting an increasingly bad reputation. When I say energy drinks I’m referring to brands such as Red Bull, Monster, Rockstar, Bullet and so on. They typically come is huge cans as well. They are also becoming increasingly mixed with artificial fruit juices to make them more appealing. Not only does this amp up the calories but it makes the sugar content sky rocket. For example, Rockstar Tropical Punch contains 260 calories and 31g of sugar! That’s 20 teaspoons of sugar (Note; 1 teaspoon of sugar= 4grams) These energy drinks truly are something to avoid consuming regularly! 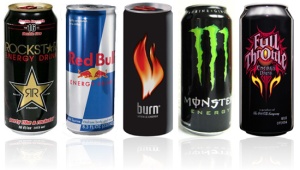 There are other drinks out there, such as Powerade or Lucozade, that are marketed as ‘sports drinks’ and something athletes should consume to help them. However, you should really only consume these ‘sports drink’ (I’m using the term lightly) when you’re participating in long, intense exercise. Typical standard is to skip the ‘sports drink’ if you’re running anything less than 30 minutes. Consumption of them before, during or after anything longer than this can be beneficial as it provides your body with carbohydrates, which is necessary to endure and recover. I typically opt for water however, whatever the distance or I’ll choose energy tablets, which you dissolve into water, for example I drank High5 Zero Pink Grapefruit before I ran Tough Mudder in 2014. I did notice I didn’t cramp during the race, which I did in 2013. High5 is an electrolyte based ‘sports drink’ and I personally prefer them a lot more to traditional ‘sports drink’ or energy drinks. But again, I only consume them for hard, intense, long exercise (or if I’m hungover, they work wonders).

An increasingly popular alternative is to make your own! Here’s a recipe I found on Everyday Roots.